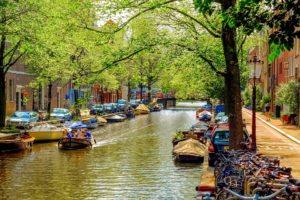 Welcome to the Netherlands

Situated in Western Europe, the Netherlands has a population of seventeen million people.  Bordered by Belgium, Germany, and the North Sea, the country is generally flat with only 50% of its land exceeding one meter above sea level. The Netherlands is a European transport hub with a strong economy and an emphasis on foreign trade. It is generally seen as a very liberal country, welcoming to foreigners.

Like much of Europe, the official currency of the Netherlands is the Euro (EUR €). It is recommended that you bring Euros with you

The Netherlands are a part of the Schengen Co-operation Agreement and hence nationals from countries within the Schengen area do not need to show their passport when entering the Netherlands – however, if this is your case, you always have to show an official document that proves your identity, so we recommend you bring a valid ID (preferably a passport).

For all other nationals, a valid passport is necessary, and for some nationals a visa is required as well.   Please ensure your passport has a minimum of three months validity at time of entry.

Norway uses the Europlug (Type C & F), which has two round prongs. The voltage is 220 volts.  Personal electronics such as most laptops automatically work with 220 volts.  Your charger will have information on power input.  Check if you will need an adapter to change the shape of your power plug.

The Dutch do tip, but modestly. For example, the standard for tipping in restaurants and bars is 10%.

The Netherlands has high quality health care. Apotheeks and drogists (pharmacies) are widely available to assist with any minor medical issues. Every town or area has a general practitioner available 24/7 in a place called a Huisartsenpost. Near the Conference venue, a Huisartsenpost is located inside the hospital (ziekenhuis).  Make sure you have valid travel and health insurance for your whole stay in the Netherlands.

There are no mandatory regulations regarding vaccines to enter the Netherlands.  It is however recommended that you are vaccinated against diphtheria, tetanus, pertussis (whooping cough), mumps, rubella, and polio.

The Netherlands has many beautiful, culturally-rich places to visit.  From the famous canals of Amsterdam to the historical districts of The Hague, there is something for everyone.  To learn more about destinations within the Netherlands, head to the Netherlands’ Tourism website.